Two great leaders of one mind:

“Nothing is more precious than independence and liberty.”
-         Ho Chi Minh

Hi, Everyone! To give another example of the esteem Savarkar was held in, read this excerpt from The Last Valley: Dien Bien Phu and the French Defeat in Vietnam.[1]


“Ho Chi Minh’s bedroom and study are still as they were on the day he died. The books near his bedside include one on New Zealand Verse, another on the Indian nationalist leader Veer Savarkar, another on the history of Vietnam, another on Marxism and several other titles I could not read clearly. These books were written in English, German, French, Russian and Vietnamese. He read all these languages, and spoke many of them. No party hack, however sophisticated, could have put such an eclectic collection of books together after his death. It had to be his.”


Ho Chi Minh, President of North Vietnam from 1954 until his death, led the Vietnamese nationalist movement for more than three decades. Upon his death his “house on stilts” where he died was preserved as is. There is a study beyond his bedroom which is lined with bookshelves too. So the books he had on the desk next to his bed must have a special significance to him.
Savarkar’s book is one of them according to Martin Windrow and there is no reason to doubt his word! 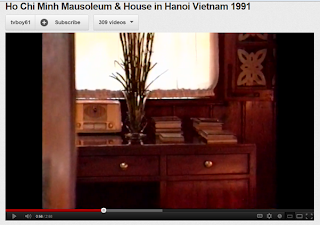 I did try to verify this fact independently, though. I did find a photo of the desk. Now the books are covered by a glass frame, I believe.


If anyone has connections in Hanoi, Vietnam, please do try to get a closer photo of Savarkar’s book.