Hi, Everyone! Anyone who has read Savarkar’s biography, even in a cursory manner, is conscious of the immense admiration and respect Savarkar had for Shivaji—from the earliest childhood. Savarkar’s chapter on Shivaji in his book Hindu Padpadshahi (find an e-book @ www.savarkarsmarak.com) gives a very good idea of this too. Time and again Savarkar has hailed Shivaji as the heroic king who wrested back large portions of India from the Mughals and actively chased a “Hindavi Swaraj.”

It seems utterly preposterous and ridiculous to me that anyone should point accusing fingers at Savarkar saying he disrespected Shivaji. It is inconceivable!

Yet we live in an imperfect world—when mud is slung at anyone it tends to stick, particularly when it is accompanied by a sensationalized, wanton act of vandalism like burning copies of (Savarkar’s) books. And so, much though it goes against the grain to give even an appearance of credibility to such fallacy by mentioning it or offering vindication for Savarkar, I have decided to do it.

Here are some examples which illuminate just what place Shivaji held in Savarkar’s heart and soul.

(I have given all the three poems at the end of this post.)

Unfortunately, I have not translated these ballads yet.

Here too was born of Jijabai, Chatrapati Shivaji,


And maidens who embraced the pyre for their honor.


Bricked to death here were the Sons of the Guru,


So staunch were they in their loyal fervor!

“Soon enough, general amnesty was granted to several of them here but not unconditionally. They had to sign a pledge refraining from any political activity for a specified time. This offended most of them. It was an infringement upon their rights! A slur upon their patriotism! Sign a pledge? Never! Savarkar was very heartened to see that despite all their sufferings, they were still such staunch patriots. Such Sons of India should definitely be free to fight for their country!
‘Brothers, there is nothing wrong in signing this pledge. Sign it and be free—free to work for the freedom of our motherland.’
‘Tatyarao, with the signing of this pledge our hands are tied! It forbids us to do just that very thing.’
‘Ah, but do you have to follow its dictate?’ asked Savarkar passionately. ‘No! A pledge imposed upon us by a foreign enemy power is worth only the paper it is written on. There is no reason to stay committed to it! It is merely a means to an end—only an avenue to break the locks of this jail.’
‘But that would be deceitful, Tatyarao!’
‘Deceitful to whom?’ exclaimed Savarkar. ‘When we have no constitutional rights and are crushed into subjugation by arbitrary laws of an enemy power, honesty as you mean it is not a luxury we can indulge in!’—he raised the palms of his hands—’the only honesty and truth for us is reinstating the honor of our beloved Hindustan. We follow any path that circumstances force us to take. If the British rule us by unlawful means, we go against this law of theirs to gain freedom. When under duress we make petitions and even sign pledges!’
‘Yes, Tatyarao, there is much in what you say. But it still seems cowardly to sign such papers. The blood of heroes like Shivaji flows in our veins! What, shall we supplicate before the enemy? History will label us as cowards and hypocrites!’
‘We cannot swerve from our path by fear of adverse public opinion! Shivaji was very brave indeed. Yet when needed, he took a conciliatory position with Aurangzeb. At one time, Shivaji suffered many losses from the mighty Mughal forces led by Mirza Raja Jaisingh and Dilerkhan. He made a small capitulation and signed the Treaty of Purandar. He was forced to hand over to Aurangzeb many forts and go to Agra. Here he was treacherously imprisoned by Aurangzeb. Shivaji sent petition after petition professing loyalty to him, all the while planning his escape! It was his strategic move to lull the enemy. Can Shivaji be accused of cowardice? Change of heart? Never! We must also admire the forethought with which he killed the mighty Afzal Khan by ripping open his stomach with the tiger claws. If he had not broken his promise of being unarmed in that meeting, Afzal Khan’s plot to crush him to death would have been successful!’
‘Tatyarao, indeed, we did not see it in this light.’”


After reading this (and the poems below) there should be no doubt in anyone’s mind in just how high an esteem Savarkar held Shivaji. 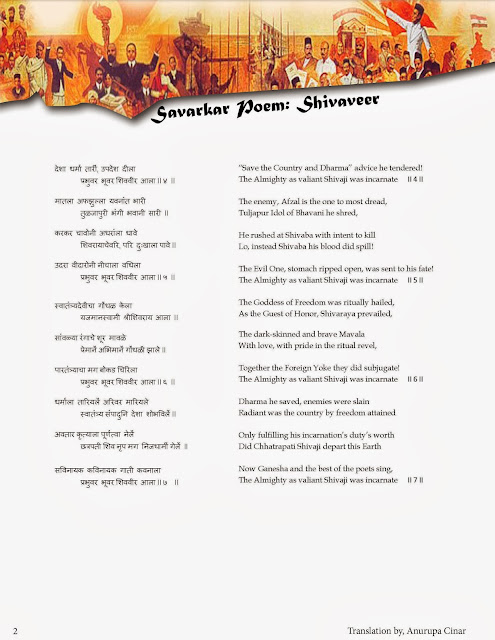 Aarti on Shivaji composed by Savarkar