“A man can do all things if he but wills them.”


Hi, Everyone! As of yesterday, I started work on another project which excites me greatly—the translation of the Italian book Hemuinu, l’Architetto by Efrem Piccin. When I say translate, I really mean attempt to translate, for I do not know Italian. But I have made a successful beginning and am greatly encouraged by it! My undying gratitude to Google (Google translate, in this case) and modern technology that makes such miracles possible.


This is one of those things one never dreams of, and yet it happens . . . ! I consider it a great honor to be associated with such a work of deep research on the Great Pyramid of Giza, in any capacity. I have always been fascinated—absolutely riveted—by the Great Pyramid since my childhood. I read and collect all kinds of books on it. I have the greatest respect for anyone who genuinely researches them—and they are so few, at least as far as the general public knows—irrespective of what their theory may be. 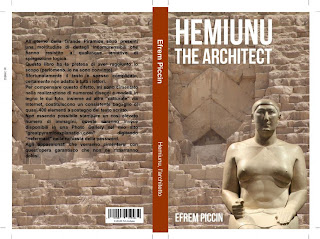 Efrem Piccin, a professor of physics in Italy, is one such who has devoted 8 years of his life to his research of the Great Pyramid. He has made actual models to illustrate his hypothesis, photographs of which are available for study for those who buy his book. His book has been released in the end of 2012. It is available here:


I got to know Efrem quite by accident. When I was in the throes of editing my novel—and going stark, raving mad—I decided to take a break by hunting online for info on the GP. For two days I hunted obsessively (as I am wont to do) with not too many results. It is a strange thing, but almost everyone posts (and writes) of only one section of the GP which gives the location of the King’s Chamber and the Queen’s Chamber. But how—I very much wanted to know—were they located along the other plane? Were they offset from the center? By how much? There is great paucity of material on that. And just I was giving up, I came across a website (at the time, I did not even register the name) where there was a mention of this info.


I was so utterly grateful I dashed of an email from the “contact us” unloading my mind of this problem and asking for help. The very next day I got a reply—in Italian . . . !!—along with a wonderful, wonderful architectural section of the GP that I have never seen before. Fortunately, my venture into translating French documents using Google translate, left me unfazed when faced with the Italian words. I was able to read and reply to Efrem’s e-mail. Soon we were writing regularly. In fact, I have developed quite an efficient system of writing the emails and double-checking to make sure what I have written is what I intend to say.


I was very impressed with Efrem and his dedication to his research. To me it seemed imperative that such a research must be made available to the world at large. And that meant an English version. It was going to be difficult for him to get that done. That is when I offered to attempt the translation myself. I figured it cannot hurt and something is better than nothing.


Efrem was quite taken aback, I’m sure!! He demurred: it is an academic book, he said, and quite, quite complicated. Even knowing Italian, it is difficult—apparently—to grasp. I suppose he thought I had colossal nerve!! And perhaps I did!


But as I pointed out to him, I am an architect, an author, and have been fascinated by the GP for more than 25 years. That’s quite an unbeatable combination. Now if only I knew Italian . . .


Anyway, cautiously he came around to the idea and I am very, very honored that he has trusted me with his manuscript. It is quite a big deal to hand over an electronic copy of one’s manuscript to a stranger!


Anyway, so here I am. I do believe that one can do anything, if only one has the right motivation (and perseverance, faith and belief in oneself.) All the same I am relieved to know that I am able to translate Efrem’s book. I have my fingers crossed for grasping the technical aspects (haven’t come to that part yet) of the book in Italian, but I intend to make a jolly good effort!


I wish Efrem Piccin the best for his book.