Tribute to the "Vande Mataram"

Hi, Everyone! On the occasion of the Republic day of India, I want to talk on the patriotic song Vande Mataram.


January 26, 1950, was the day the Constitution of India came into force replacing the Government of India Act of 1935 as the governing document of India. It was a big step forward for India.


Two days before this on January 24, 1950, an important decision was made in the Constituent Assembly. Dr. Rajendra Prasad, who was presiding over it, stated:


“The composition consisting of words and music known as Jana Gana Mana is the National Anthem of India, subject to such alterations as the Government may authorize as occasion arises, and the song Vande Mataram, which has played a historic part in the struggle for Indian freedom, shall be honored equally with Jana Gana Mana and shall have equal status with it. (Applause) I hope this will satisfy members. (Constituent Assembly of India, Vol. XII, 24-1-1950)


This was adopted as the final and binding statement on this issue.


The Vande Mataram was composed in 1882 by Bankimchandra Chatterjee in a mixture of Bengali and Sanskrit and published in his book Anandmath featuring the Sanyasi Rebellion. The first political occasion where it was sung was the 1896 session of the Indian National Congress. Before long the poem took the freedom fighters by storm. It became the slogan, the greeting, the national cry of the freedom fighters. In 1907, Madame Cama unfurled the national flag of India—the words “Vande Mataram” proudly emblazoned across the center of it. 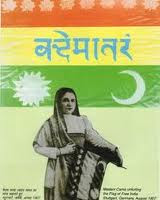 The Vande Mataram and its translations in many national and international languages got international recognition as the “war cry” of Indian freedom fighters even as early as 1906! So much so, that even the Indian National Congress adopted the first two versus of it as their national song in 1937.

Below is the cutting from the Gaelic American, October 27, 1906. It says: "The new Indian war cry, Bande Mataram, (Hail, Motherland), which the Gaelic American gave last week in Bengalee, Mahrati, Punjabee, Gaelic and English, will be found below in Hindustani, Persian and Arabic. Next week it will be given in other languages spoken in India, or in the neighboring countries, showing the extent to which the combination against British rule is spreading in the East."

Unfortunately, the Vande Mataram has been tangled up in politics, labeled as a Hindu  song, and caught up in controversy since the 1930s. Even today the argument continues.


There is a verse where Mother India is likened to Hindu Goddesses, which is quite natural since the poet is Hindu and the poem belongs to a book on Hindu Sanyasis’ rebellion (historically the "Sanyasi Rebellion" includes rebellion by Muslim Fakirs. There were several separate incidents in the late 18th century.) In the freedom movement the Vande Mataram was a symbol of Indian Nationalism. The song thrums with patriotism and love for the motherland. It was not associated with religion.

And an insight into Bankim Chatterji’s possible inspiration here:
http://www.boloji.com/index.cfm?md=Content&sd=Articles&ArticleID=1678)


Despite the honor and status conferred upon it by the Constituent Assembly in 1950, this stamp of being “Hindu” might have caused the Vande Mataram to fade into obscurity.


But how can a song from which drips the blood of the freedom fighters of India, in which we hear their screech for freedom, and which oozes patriotic fervor and devout passion for their motherland just disappear from Indian memory?


Even so, one must be ever grateful to the Indian artistes for immortalizing it. Superstar Lata Mangeshkar’s melodious voice echoed all over India singing Vande Mataram in the movie Anand Math directed by Hemen Gupta in 1952. Watch it here:
http://www.youtube.com/watch?v=xj1Iy4nRMkc


All India Radio and Doordarshan kept it fresh and alive in Indian hearts.
(Here is the Doordarshan clip: http://www.youtube.com/watch?v=Pmy4HOn1NWs)


And A. R. Rahman, the super-talented, patriotic composer (and much, much more) of international fame took it to new heights with the release of his album Vande Mataram in celebration of India’s fifty years of independence in 1997.


Vande Mataram, sung by various artistes, then reached the pinnacle when it ranked second in the top ten songs (out of 7000 songs worldwide) in an international poll conducted by BBC World Service in 2003!!


The Vande Mataram is today rendered by many artistes in song CDs, video albums, movies, and more.


It will echo in the hearts and minds generation after generation; it will continue to get the honor it deserves and; it will keep the Indian patriotic flame burning bright.


Anurupa
Posted by Unknown at 7:13 PM