“The Joke of the Century”


“In words are seen the state of mind and character and disposition of the speaker.”

Hi, Everyone! Just yesterday—following my self-imposed task of rectifying misinformation re Savarkar that I come across anywhere—I found myself commenting back and forth with an FB Friend (me patiently pointing out his inaccurate, unjustified statement; he taking refuge in mockery) when he came up with a wisecrack that surely takes the cake!


Here I was thinking I have heard it all—the many unjust, untrue, maligning words re Savarkar—but no! There are always some more, it seems.


I had just made a statement to the effect that it was Savarkar’s amazing leadership, definitely not  "dictatorship," that enabled him to raise the Hindu Mahasabha into a strong political party capable of giving competition to the Congress in the elections.


To my consternation his reply was: “raising the Hindu Mahasabha into a strong, political party - Joke of the century - liked it!”


“Joke of the century”!!! Savarkar ground himself to dust to fight for a United India, for saving India from partition and here all his work was described as a "joke"! Impossible to put my emotions in words when I read those words.


I couldn’t help thinking again how unfortunate it is that so many Indians, far, far from appreciating their freedom fighters, cannot even muster up a modicum of respect for them.


However, despite the heavily promoted distortions in Indian history, Savarkar’s role in the politics of India, his role in raising Hindu Mahasabha from an embryo stage to a political force is a well-documented fact. Both, reputed historians and reputed biographers have recorded it in their books.


Any researcher of Savarkar (even the Savarkar-bashers) should be well aware of that. In the course of my research, I have dug up international corroboration of this fact. I have in my possession a boxful of newspapers clippings, reports, even an article that give testimony to Savarkar’s extraordinary political feat.


I am going to post some of them here. Keep in mind that Savarkar was released from twenty-seven years of British Bondage on May 10, 1937 and took over presidency of the Akhil Bharat Hindu Mahasabha only in December of 1937. He didn't have much time to turn things around!


By 1939 itself Savarkar was a force enough to send a cable to the President Roosevelt of United States! These clippings (and there are several more) give evidence of it. Savarkar’s cable reads: “If your note to Hitler was actuated by disinterested human anxiety for safeguarding freedom of democracy from military aggression, why not also ask Britain to withdraw armed domination over India, allowing a free self-determined constitution? The great Indian nation can claim as much international justice as small nations.” 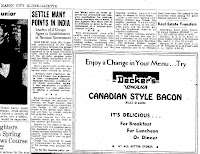 
This clipping says that Congress and Hindu Mahasabha will have to agree on any decision re future of India.


Syracuse Herald (3/22/42) This clipping clearly states that Hindu Mahasabha is one of the four “factions” whose opinions Sir Stafford Cripps will have to consider in deciding the future of India.

Definitely HM was a political force, wouldn’t you say?


Clearly mentions that this photo (the original was of very poor quality) is from the March of Time’s study “Crisis in India.” The write-up (incomplete here) gives some particulars of Savarkar.


6)    Excerpts from an interview of Savakar’s taken by an American journalist and published in the LA Times in 1943: “But he has a certain power of personality and is definitely a figure of some importance on the Indian political scene today . . . How he managed it I don't know, but despite all that confinement he was enough in tune with the spirit of the times to get into the political whirl and come to the top of a strong minority party which exerts a considerable influence today. He's a real story.”


7)    In 1945, J. M. Deb has written a book Blood and Tears featuring all the major parties of India and their role in Indian politics at the time. This book is important because it records history as it happened before distortions.
He too refers to HM as the third largest party in India. Here is a link to his piece on Savarkar and the Hindu Mahasabha:
http://www.anurupacinar.com/pdf/Excerpts%20from%20Blood%20and%20Tears.pdf


All this gives a very good idea that Savarkar did indeed turn the Hindu Mahasabha into a political force. After reading this, if there is any truth in them, no one should find that statement the “joke of the century.”


That story of (Congress) dirty politics and treachery is well covered in my novel Burning for Freedom.

Anurupa
Posted by Unknown at 8:26 PM