Savarkar: On this Savarkar Jayanti Day . . .

“If you can dream it, you can do it.”
― Walt Disney Company

I have a dream . . . a goal . . . a purpose: worldwide justice and recognition for Savarkar.


On this day of Savarkar’s birth anniversary, my mind flits back to the last week of December 2008 when it all began for me. Putting 3-4 stress-filled years of intense volunteering at my kids’ school behind me, I was all set for chasing research on my favorite subjects: the Great Pyramid of Giza, chasing theories arising (in my mind) from the Holy Blood Holy Grail—an absolutely fascinating book!—and the Coptic Gospels written before the birth of Christianity (and kept out of the bible.) I had drawerfuls of material collected and was raring to go, when out of the blue the thought popped in my head that I must read a biography on Savarkar. All I knew of Savarkar then was the haunting song Sagara Pran Talamalala and some nonsensical (and erroneous!!) tit-bit re his having “escaped from Andaman squeezing through a toilet pipe”—which but naturally, I found mystifying.


The urge to find out more was very, very strong. All my life, though I respected Savarkar a lot, I remained uncurious about him. Why it took this great age of 45 before I felt this urge, I don’t know. Anyway, now the bug had bitten me. As I live in the US, I crossed my fingers and hoped I would find a biography online. And sure enough www.bn.com had one written by Shri Joglekar. I immediately set about devouring that book—and life has not been the same since . . .


To say I was electrified is putting it mildly! A panorama of Savarkar’s incredible personality, deeds, thoughts, and actions mushroomed in my mind. “Oh, but he is a foremost Karmayogi!” was my uppermost thought—being a deep believer of the Bhagavad, that was the crowning glory for me.


After that, I was like one possessed to find and read everything connected to Savarkar. Day and night I thought only of Savarkar; by mid-February 2009, it had become crystal clear to me that not only was a great injustice done to Savarkar in his lifetime, but the injustice was continuing so many years after his death, too—what I like to call “an ongoing-conspiracy.” The amount of anti-Savarkar material—misrepresenting, misinterpreting, and maligning—filling the cyberspace was very, very disturbing. Why, I thought to myself, don’t people read the truth for themselves? Why don’t they read what Savarkar himself is saying? He is so clear and frank. Why is the twaddle written by Savarkar-bashers more believable than the truth? I haven’t any answers to that.


This gross injustice to Savarkar was unendurable. I was all churned up with the need to do something about it. But what could I really do? 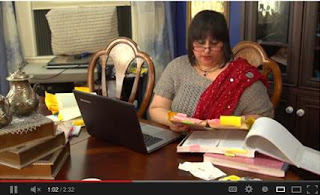 Then one morning I just woke up with the determination to write, publish, and publicize a novel showcasing Savarkar as I saw him, putting the injustice done unto him in a story based on real, documented facts before an international audience. The dream was born . . .


It was the most preposterous idea! There I was: a widow with three young kids (aged 11, 9, and 5 at the time) with no real friends, connections, or a circle of influence, living a quiet, very quiet, life. Though living by standing up to my convictions, my natural inclination was to blend happily in the shadows. To top it all, I had never in my life written a word, other than schoolgirl-essays (donkey’s years ago!) While I was rather proud of my essay writing prowess then, it was a far cry from that to writing a novel—and one worthy of muscling in into the international market, no less! 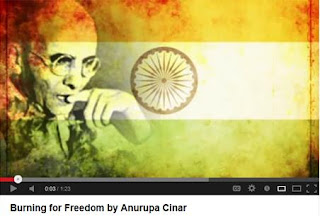 Being very practical (despite dreaming what may be termed as an impractical dream!) I was very much aware that my novel would per force involve the exposing of Gandhi. In fact, to my mind, to understand the truth of Savarkar in its totality, it is necessary to understand the truth of Gandhi (and Nehru, and the Freedom Movement.) That was also to be a feature of my novel.


Fortunately, I had two things going for me—the only two, I believe, that are essential to chase dreams—an abiding belief in God and myself, and the self-knowledge that I can move mountains, given the right motivation.


And so I began my headlong march: all I could see was my goal and myself; nothing else mattered. My head was in the clouds, but my feet were planted firmly on the ground.


(I have captured the “growing pains” of my early days of writing Burning for Freedom in a series of posts:
http://anurupacinar.blogspot.com/search/label/The%20Growing%20Pains%20of%20Burning%20for%20Freedom
Do read them; even if I say so myself, they are quite entertaining. I often used to think it was a good topic for a hilarious comedy!
I have also written posts on “Divine Intervention” which has been so necessary for the writing of my novel:
http://anurupacinar.blogspot.com/search?q=divine+intervention)


Now four-and-a-half years later, my novel Burning for Freedom is written, published, and publicized (ongoing)—but that I realize is just the tip of the iceberg! There is much more to be done: more books to be written, more research to be dug up, anti-Savarkar articles to be responded to, and answers to some very odd things that people say to be given.


Bhagat Singh himself respected Savarkar very much and visited him in Ratnagiri. He even published a translation of Savarkar’s Indian War of Independence, 1857 in Punjab to inspire patriotism in the people.


In any other country just the mere fact that a freedom fighter had selflessly sacrificed fifty years of the prime of his life to gain freedom would have made him worthy of undying devotion. But in India . . . never mind Savarkar’s incredible contributions in the freedom struggle and social revolution, mud is even slung on his patriotism!


It is a crying shame that so many Indians today can’t see Savarkar for what he was: an unswerving, unparalleled freedom fighter who dedicated his entire life for the freedom and service of his people and country.


And so, odd and ridiculous though I find the above statement, I have decided my next post will be on that topic. And odious though I find comparisons, I shall be making some—between Savarkar-Bhagat Singh, Savarkar-Gandhi—to show the fallacy in it. In fact, I shall end here with a comparison I made in one of my interviews which was also published in the Hindu Voice, November 2012 (http://www.readerviews.com/InterviewCinarAnurupaBurningForFreedom.html) :


“Tyler: I understand from your book that Savarkar disagreed with Gandhi on some points about Indian independence. How were these two leaders different?
Anurupa: There isn’t any point of similarity between Savakar and Gandhi, except that they were both charismatic leaders, capable of holding a nation in thrall. I shall mention the three strongest differences that come to mind:
Savarkar lied and deceived the enemy, the British, but never ever the Indians—Gandhi, on the other hand, deceived the Indians time and time again and was friends with the British!*
Savarkar had political acumen. Gandhi had no political vision.
To Savarkar, the goal of freedom was paramount, the means were flexible. To Gandhi the goal of freedom was inessential, the means were paramount.”