Biography of Savarkar, Post 12: Social Revolution in Ratnagiri, Part I

﻿Since childhood, Savarkar believed that all strata of Hindu society should treat each other with equality and respect. He had advocated widow (and not only child-widows) remarriage to members of his society.  Now for the first time in his life he could focus on these social issues. In Ratnagiri he went on a warpath for a social revolution:


·        toured towns in the District and made speeches decrying the practice of caste-based segregation; particularly ensured that schools in these places stopped this practice; roped in the Government to help his cause.


In 1932 in his presentation to Officer Lamington, Savarkar said, “Once the children are educated together, they will not observe caste hierarchy in later life.  They will not feel the need to observe caste division.  Therefore the Government regulation of 1923 must be strictly followed.  In addition, the Government should abandon the title ‘special schools for low caste children’. This very title creates a feeling of inferiority among children attending the school.”


·        insisted that children of the so-called low castes compulsorily attended school and distributed chalk and slates and giving monetary incentives to their parents; brought up an ex-untouchable girl in his own house despite having a very meager income.


·        organized inter-community dining, mass haldi-kumkums, and distributed sweets to all strata of society on festival days.


·        started the Akhil Hindu Restaurant open to all and employed ex-untouchables to run it. 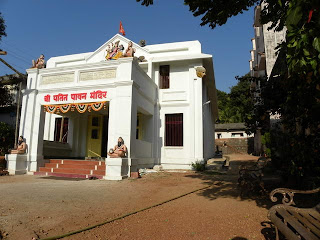 ·        had the Patit Pawan temple built—the trustees of which had to belong to all four ‘varnas’ and ex-untouchables, and it was accessible to all Hindus. Any Hindu who took a bath and wore clean clothes would have the right to perform puja here, provided he had knowledge of the priestly duties. Everyone visiting Savarkar was first required to eat at this restaurant and visit the temple.


·        had an ex-untouchable perform padya-pooja of the Shankaracharya; something unthinkable even today.


·        personally taught ex-untouchables to read and write and recite the Gayatri mantra, hitherto the preserve of ‘upper’ castes. He had an ex-untouchable perform ‘keertan’ and being accorded respect by Brahmins.


·        brought back into the Hindu fold several individuals and families who had been converted and personally arranged for their marriage and other rituals.


·        composed poems and other literature advocating social reform and rationalism and wrote the Hindu Padpadshahi, one of the first books on history of Marathas to be written in English.

Anurupa
Posted by Unknown at 6:55 AM