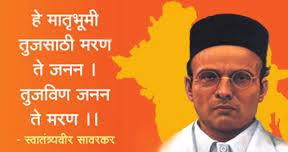 ·        December 1945: elections were to be held. The victorious party would be handed over the reins of a free India. It was showdown time.

·        Savarkar’s health had completely incapacitated him by this time. He could barely get out of bed. His teeth were pulled out and dentures were yet to be fitted. He was simply unable to play a part in the campaigning. Without his brilliance and their limited financial means the Hindu Mahasabha backbone sagged.

·        On the other hand, with unlimited finances being poured into their coffers by the industrialists, the Congress bombarded the Hindus with false slogans of keeping India united. They did an about turn and now hailed the INA soldiers as patriots and came to their defense with much fanfare. They also squashed the Hindu Mahasabha opposition by bribing, threatening, or tricking their candidates from withdrawing from the elections. Even the Hindu Mahasabha President, Dr. Shyamaprasad Mookerjee, was maneuvered into withdrawing his candidacy.

·        The combined effect of this was that Hindu Mahasabha was routed in the elections. The victorious Congress—with their Muslim appeasement policy and penchant for Pakistan—was in charge of India’s fate.

·        Savarkar’s health was so shattered by this news he had to be removed to Walchandnagar in complete seclusion.
- Anurupa