Give the Revolutionaries their due!


On this August 15, 2013, Independence Day of India I am posting an article written by Dr. Shreerang Godbole in 2008. I consider it a must-read.

“Another Independence Day, a seasonal outpouring of patriotism. The Prime Minister will deliver a lacklustre speech from the ramparts of Red Fort; loudspeakers will blare out patriotic Bollywood numbers; the Father of the Nation and the First Dynasty will be invoked.  We shall be told that the mighty British Empire was brought to its knees by a frail saint from Sabarmati without shedding a drop of blood, a feat unparalleled anywhere in the world.  There will be no mention of the blood that was shed, barring stray references to Bhagat Singh and Jallianwala Bagh. Any mention of the vivisection that preceded Independence is a strict no-no – we need to ‘maintain unity-integrity-peace-communal harmony.’
Post-Independence generations have been fed on a staple diet of false and motivated history - that we won freedom through non-violent means. A natural corollary of this theory is that British Rule was largely benign, despite some stray excesses. In return, the English gave us the railways, English education, a system of administration, a sense of oneness. A nation fed on the fiction of ‘freedom without bloody sacrifices’ can hardly cherish it, much less defend it with bloody sacrifices.

If truth be told, freedom was not won by pleas, prayers and petitions.  It was won IN SPITE OF Congressmen like Gandhi and Nehru who would have been happy with less. Gandhi was content as ‘the most obedient servant’ of the Empire (his own words), but that is a story still waiting to be told. 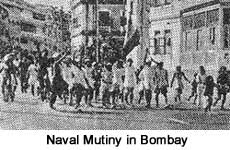 Freedom was won substantially by violent and armed struggle by revolutionaries, a process that culminated in the Naval Uprising of 1946. It was won thanks to the blood and tears of hundreds of nameless revolutionaries and their families who braved British barbarity and faced death, deportation, imprisonment and forfeiture of property.

The struggle was carried out not only in India, but also abroad, by people such as Shyamji Krishnavarma, Madam Bhikaji Cama, Barrister Sardarsingh Rana, Virendranath Chattopadhyaya, Sardar Ajit Singh, Lala Hardayal, Rasbehari Bose, Raja Mahendra Pratap and Champakraman Pillay. While Gandhi and Nehru enjoyed special status during their brief trips to jail, the worst atrocities were reserved for the revolutionaries.


Consider Transportation – it effectively removed the revolutionaries from the theatre of war against the British without imparting them the halo of martyrdom. Through Transportation the British hoped to erase the memory of these freedom fighters from public consciousness.  In 1872, Ramsingh Kooka of Punjab was transported to Burma (Myanmar). Fifty of his followers were blown off guns without trial.

In 1879, Vasudev Balwant Phadke of Pune was sentenced to Transportation for Life to Aden, 3200 km from Mumbai, by sea. Some 60-70 of his followers were sentenced to Transportation for Life and deported to the Andaman Islands. Even in exile, Phadke was denied the company of his followers. He died in Aden in 1883 clutching the soil of his motherland which he had kept with himself.

In May 1907, Lala Lajpat Rai and Sardar Ajit Singh (uncle of Bhagat Singh) were transported from Lahore to Mandalay (Myanmar), 3400 km away. So strict was the security that the two leaders did not know that they were imprisoned in the same place. In 1908, at the age of 52 years, Lokmanya Tilak was sentenced to Transportation for 6 years to Mandalay and kept in isolation in an area of 150 ft x 50 ft with only the company of a cook. There was no parole for him even when his wife was on deathbed in 1912. The distance from Mumbai to Mandalay by sea and land is 4800 kms. The average life expectancy of an Indian male in 1908 was 48 years, so it is safe to presume the British wanted Tilak’s dead body to come out of prison.


In 1909, Savarkar's elder brother Ganesh Damodar (Babarao) was sentenced to Transportation for life to the Andaman Islands, for publishing four poems. All his earthly possessions, including even saucepans and broom, were confiscated. His wife Yesu was left homeless, penniless and destitute. She sought refuge in the local crematorium for some time. She never saw her husband again and died in 1918. Permission to visit her husband came a day after she died!

In the Andamans, Babarao was denied even basic medical treatment; it was a miracle that he survived. Even after his release, he was lodged in Belgaum (solitary confinement) and Sabarmati jails. He was finally released in September 1922 only when the British were convinced he was going to die.

In 1911, Vinayak Damodar Savarkar was sentenced to Transportation for Life, twice, to Andaman Islands; the sentences were to be served in succession. Savarkar's personal property and possessions, including his spectacles, were confiscated. His father-in-law Mr Chiplunkar was Dewan of Jawhar principality in Thane district. British authorities forced the Raja of Jawhar to sack Chiplunkar and expel him from Jawhar state overnight.

Transportation to Andaman Islands did not mean prison sentence for life. According to rules, regulations, customs and practice of the British Administration, prisoners were allowed to work outside the prison after a year or two, settle on the island, and call their families from India. Savarkar and his elder brother Babarao were detained in the prison for more than 10 years in flagrant violation of these rules! They were also forced to do physical hard labour all the time. 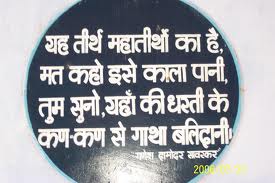 In 1924, Savarkar was released from jail on condition that he would not leave Ratnagiri district and would abstain from political activities for five years. But the Raj extended this duration periodically so that Savarkar was unconditionally released only in 1937. Many contemporaries of Savarkar including Bhai Parmanand, Hotilal Varma and Hemchandra Das, were sentenced to Transportation for Life to the Andaman Islands.

Apart from the deaths at the gallows, many prisoners committed suicide to escape the harsh prison conditions. One of them was Indu Bhushan, an accused in the Alipore Bomb Case.  He was yoked to the oil-mill and tortured sadistically, which turned him into a physical and mental wreck. On 29 April 1912, he ended his agony by committing suicide.

Another accused in the Alipore Bomb Case, Ullaskar Dutta, was made to carry wet bricks and haul water up a hill. When he refused, he was yoked to the oil-mill and then made to stand handcuffed for a week. When he developed fever of 107 degrees F, he was made to stand in the blazing sun. When he became semi-conscious, his limp body was seized by jail officials and brutally thrashed. Only when a kindly doctor certified him insane was he let off.

Savarkar confessed he was also on the point of committing suicide on three occasions, but each time persuaded himself to fight the British to the last drop of his blood. He also prevented others from committing suicide.

The British did not spare the revolutionaries even after death. Madanlal Dhingra’s father was an eye specialist and Civil Surgeon at Amritsar. Some say he was the first Indian doctor to reach that eminent position. Madanlal was married and had a son. He had completed his studies and had he desired, he could have lived a life of luxury. But, he chose to be a martyr for India's freedom struggle and went to the gallows in August 1909.  Dhingra wished his last rites be performed according to Hindu Dharma and that he should be cremated. Many Hindus petitioned to Home Secretary Herbert Gladstone that Dhingra's body be handed over to them, as Brahmins were ready to perform the last rites. The request was denied! The body was put in a coffin and buried within the prison premises.


The vengeful attitude of the British did not diminish with time. Thirty-one years later they behaved just as barbarously. In March 1940, Udham Singh assassinated Michael O’ Dwyer, Governor of Punjab at the time of the Jallianwala Bagh massacre. The British refused cremation according to Hindu rites to Udham Singh also, and put his body in a coffin and buried it within the prison premises.

The sacrifices of these freedom fighters fuelled the fire of patriotism in the hearts of ordinary Indians during the freedom struggle. If our school children are taught about their sacrifices, they will become the Kshatriyas of tomorrow, ready to defend their dharma, sanskriti and rashtra from alien onslaughts.

Dr. Shreerang Godbole is a Pune-based endocrinologist, social activist and author. He has contributed in making www.savarkar.org
Posted by Unknown at 6:44 PM

Email ThisBlogThis!Share to TwitterShare to FacebookShare to Pinterest
Labels: Freedom Movement of India