Hi, Everyone! Since researching and writing on Savarkar, I have had the good fortune to come across several people with whom I can connect. But there are two whom I consider very special. One is Dr. Shreerang Godbole, to whom I have dedicated my book Burning for Freedom, (I have posted on him in my category “Divine Interventions” and the other is Vikram Edke—to whom I shall dedicated the audio book of Burning for Freedom. Vikram is extremely dedicated to Savarkar and sees it as his honor and duty to do anything for Savarkar. That in itself is enough to make him special but there is also much, much more!

I first heard of Vikram almost a year ago. A friend of his bought B for F from me to send to him. I figured I might as well sign it and asked his name—but for this I may never have heard of him and that would have been a great loss! Along with his name I also learned that he gives lectures on Savarkar. I was so intrigued, I hotfooted it to Facebook to be“Friend” him.

At first I read his posts out of curiosity but shortly I was hooked. He really is an exceptional writer—a wonderful style, satire, humor, and very important for me: no swear words or bad-mouthing. But he writes only in Marathi and Hindi, and for me that was quite a stumbling block! My command over those languages is so-so at best and is completely dependent on my moods. If I feel off-color or disturbed, first thing to go out of the window is my understanding of Marathi and Hindi. So reading his posts was like running an obstacle race: race for bit; hit a snag; dash to the dictionary; then hop over the hurdle. But it was worth all the effort!

I discovered he has quite a repertoire of topics and puts them in today's context, too; besides Savarkar, he writes very knowledgably on other freedom fighters of India and writes and posts from other sources on ancient India. I really loved this. I am very fascinated in all ancient civilizations but somehow had never studied ancient India in any depth. The horizons of my knowledge widened noticeably, thanks to him.

I have an innate aversion to listening to anyone speak: speeches, talk shows, sermons et al. But Vikram is an excellent speaker and the only one I take time out to listen to. Not only does he have interesting information, he changes his approach to suit the audience. He writes the most wonderful poetry, too! Here is a link to one of his really special poems:
http://vikramedke.com/blog/uttishthat-jagrat-prpya-varannibodhat/
And a link to his other poems:  http://vikramedke.com/blog/category/poetry/

Soon another facet of his personality emerged: he was so very-well versed in Sanskrit, a scholar, in fact! He could quote and write authoritatively on Vedas and other valuable ancient Indian treasures. I particularly loved his “proofs of unimportance of caste in the Rigveda.” I was delighted when he wished me for my birthday in Sanskrit.

Since 2009, I look at the world from “how will this help Savarkar?” spectacles; so naturally right away it struck me that Vikram would be of great help to me in rescuing a couple of my Savarkar poem translations from limbo-land. Savarkar’s poems written in Sanskritized-Marathi are impossible for me to understand and yet of course, I have to translate them! I sent over a particularly difficult poem, Marnonmukh Shaiyyewar, to him and within minutes he replied giving meanings and explanations. That was a tremendous help for me in revising my translation and it has now seen the light of day.

Reader, in case you haven’t kept tally, I’ll put Vikram’s talents (at least those of which I am aware) in so many words: writer; poet; orator; scholar; historian, and lawyer. Not only does he have these talents, he is using them and very effectively, too! It seems to me his parents have named him very aptly: Vikram!

I always maintain that people reveal themselves when they speak and write (even if they don’t mean to) and I was impressed with the maturity of thought and the values that Vikram’s writing revealed. One day I discovered that he too, like me, is a deep believer in the Bhagavad Gita.

So you can see why he holds the “very special” spot in my life.

With all his talents and achievements, you might be forgiven in thinking that Vikram has reached an advanced age! Actually he is (if he’ll forgive me for saying it) very young. He turned 25 today. 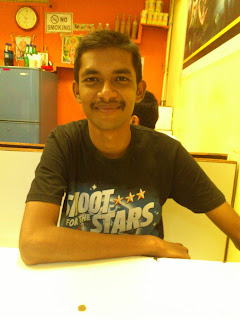 I was listening to a radio show on which he was invited to speak, the lady asking him questions kept referring to him as “tu” rather than the respectful “tumhi” or “aapan”—a great solecism on her part! It is normal to accord respect to any learned personality; she shouldn’t have tossed it away just because he is young. I was sooooo mad! I hunted online for her contact information for two days to give her a piece of mind. Fortunately for her, I didn’t find it.

There is a lot more I could write, but I am going to save it for a second installment down the road. But this I shall certainly say, that Vikram’s and my path should cross is for me a case of “Divine Intervention.”

Anurupa
Posted by Unknown at 11:30 AM