This short story is fictionalized from the anecdote of Narayan Damle from the book Mi Pahilele Savarkar (The Savarkar I Saw,) Veer Gaurav Samiti, Pune; page 91. This incident takes place in 1924-25 or so.

The sounds of chattering voices and a banging of coconut on the husker filled the peace of the evening. The men-folk of the Damle household and their four male servants were making a new coir rope for the pulley of the well. The servants were extracting the husk; Vishnupant, head of the household, was rolling it; and the boys were plaiting it into a rope.
“Shhh!” admonished Vishupant, “make less noise! Bhiku, don’t bang the coconut so noisily.”
“But, Vishnupant, it is a noisy job, so how . . . ?” said Bhiku, the servant, a little helplessly.
“I don’t know, Bhiku, we must try at any rate,” replied Vishnupant. “Tatya’s room is just around the corner. We don’t want to disturb him, surely?”
“Yes, yes, that’s true.”
Vinayak Damodar Savarkar, an intrepid, charismatic freedom fighter of India, had just been released from fourteen horrendous years of hard labor in jail and as a condition of that release, confined to the Ratnagiri District. He was the house-guest of the Damle family in Shirgaon at this time. In the evenings it was his practice to write in the quiet of his room.
“Baba,” said Moreshwar, Vishnupant’s oldest son, “he is such a great personality, so-o-o-o learned.”
“Baba,” piped in Narayan, the youngest, his eyes opened wide in wonder, “and he is a barrister, too!” He said the word with great awe. “Remember, Barrister Jinnah? He charged us `500 just for ten-minutes of representation in court. But boy was he effective! These barristers are so special!”
“Yes, Tatya is certainly that!” said Vishnupant, admiringly. “And he has suffered a lot—unimaginable horrors—in the jails.” He shook his head. “We must ensure he has peace he—” Vishnupant stopped mid-sentence.
“Tatya!” he exclaimed.
Savarkar was in their midst.
“Tatya!” cried Vishnupant again, making as if to get up. “I hope we didn’t disturb you.”
“Oh, don’t get up, Vishnupant,” said Savarkar with a smile. “Do carry on with your work. I just felt like some company.”
“We-e-e-ll, if you say so, Tatya,” Vishnupant replied and started rolling the coir again, though a little consciously.
Everyone, having stopped short at Savarkar’s entry, now resumed their work. But no one chattered! They were in awe of Savarkar.
Savarkar watched interestedly as they worked. “Arre, Vishnupant!” he exclaimed “How slowly you are rolling the coir!”
“Tatya, it is not an easy job, you know,” Vishnupant was quick to reply. “It takes considerable skill!”
“Oh, is that so? Well then, watch me!” With that Savarkar quickly squatted next to Vishnupant and swiftly and expertly rolled out a long string of coir.


Everyone gaped.
“This is what we did in the jails, y’know—picking oakum,” Savarkar explained matter of factly. 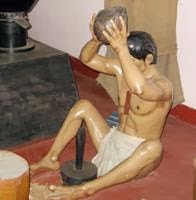 Good heavens, a scholar and a barrister willingly doing this humble hard labor—and that with such skill. Amazing! Their admiration and respect for Savarkar increased tenfold. Here was a great man, indeed!

Email ThisBlogThis!Share to TwitterShare to FacebookShare to Pinterest
Labels: Short stories on Savarkar